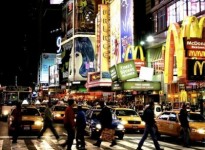 Advertisements are everywhere, but not all ads are successful ones. Each advertising method has its own advantages. All advertisers certainly strive to achieve positive results. In addition to the apparent advantages such as the increased sales and revenue, successful advertisements or advertising campaigns generate other significant things to keep your business going. So the money spent on advertising will not be in vain.
Improving Recognition of the Company’s Existence
The measure of business success is not only in financial terms but also on how many people can recognize the company’s name, identify the logo, mention the company’s slogan or sing its catchy jingle. A written document of Hewlett-Packard “The Power of Visual Communication” reveals that people can remember better about 80% of what they see, but only 10% of what they hear and 20% of what they read. Even little children recognize the golden arches on the sign or billboard of McDonald’s showing that it is close by. The instant recognition and preference of a product or service is the ultimate goal. Hewlett-Packard explains that combining both verbal and visual content is more effective than solely visual communication. Television ads should successfully combine at least both of them to create ads that consumers can easily remember.
Build Your Customer Base and Push Competitors Aside
An ad can lead consumers who only come occasionally to come back for special offers or new products and even bring in new customers. An effective advertisement should continue to build a customer base and add a large group of loyal customers who regularly conduct business with the company. The challenge is how to make your ad stand out among other ads offering similar products or services. An advertising campaign or an entirely successful ad not only increases business customers but also brings in more business than its competitors. Other buzzes should be echoed in such a way that it is able to outperform other companies. This is a tough competition that generates some smart and creative ads.
Successful Ads Reach the Target Audience
Since ads appear in many forms, businesses must choose the ads that can reach many people with their intended products or services. Ads should be placed where the target audience can read and see them. Television offers potentially powerful opportunities. At the age of 65, a person is said to have spent nine years of his life watching television, according to Norman Herr, Ph.D. from California State University, Northridge and AC Nielsen Company. This includes watching hundreds of television ads each day. But the positive results cannot be achieved unless the ad appears on the network, and in the time when the target audience is watching TV.
Successful Ads Can Change Public Habits or Opinions
Some ads are developed to shape the way people see controversial or serious topics. Television ads are good at presenting the types of ads that can influence public; though postcards, billboards and posters can also produce things (sometimes successfully) for example in election campaign seasons to garner support for certain political candidates. The advertising campaign of the movement against “drunk driving” in the 1980s is one example of ads that successfully change public behavior and perception. A year after the campaign was launched, the number of deaths from “drunk driving accident” were substantially lower.
Thus, successful advertisements can bring lots of benefits to the company. (Ehow)